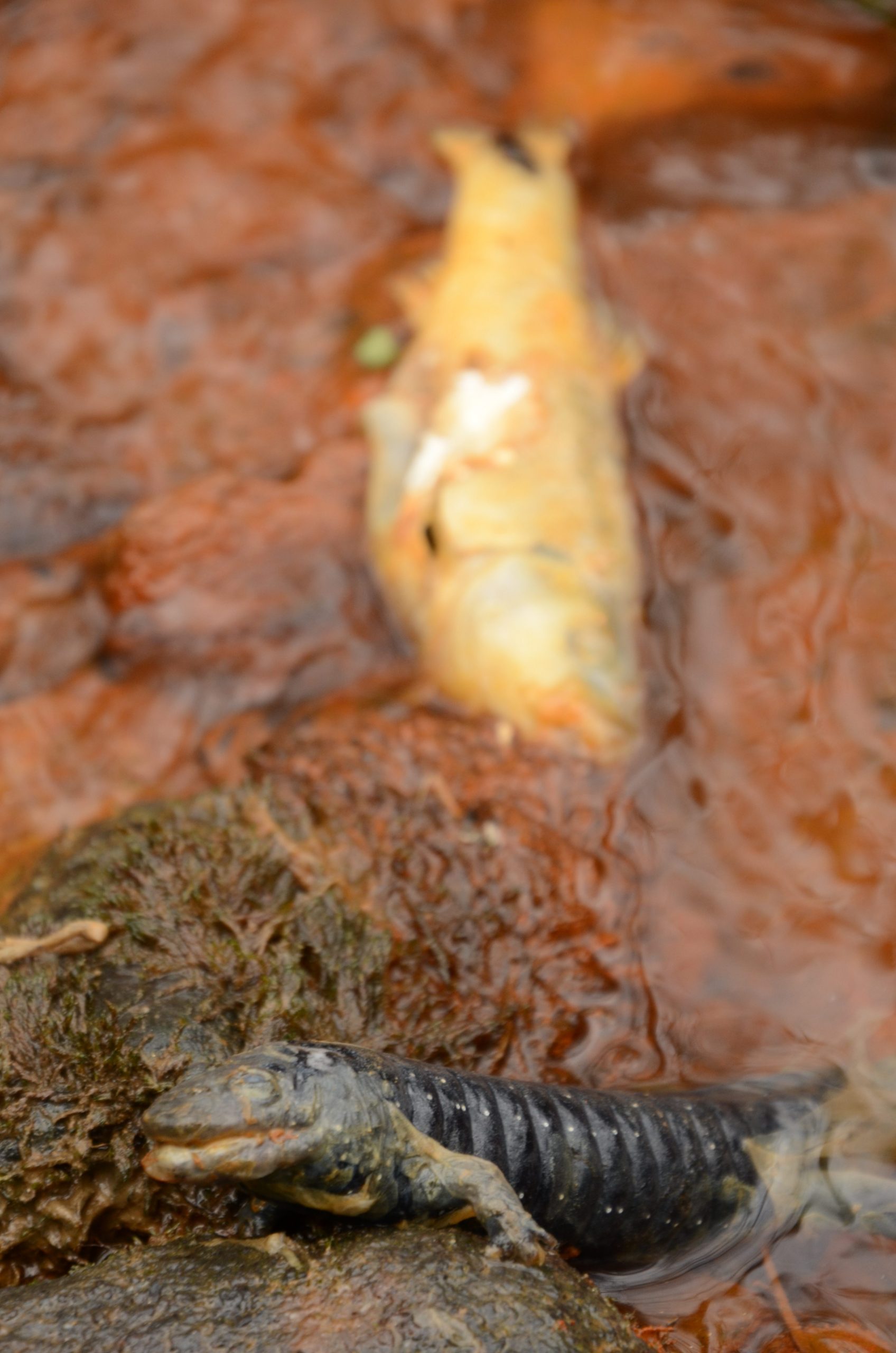 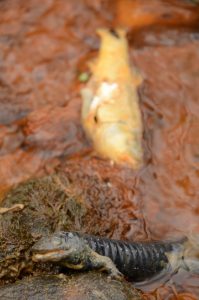 March 26, 2018 Report on Flat Creek Chemical Spill: A chemical spill March 20 at Gold Creek Foods in Dawsonville has led to an extensive fish kill on Flat Creek, a tributary of the Shoal Creek and the Etowah River.

The spill of ferric chloride occurred March 20 when a forklift driver at the facility punctured a barrel containing the chemical, according to reports in the Dawson County News. However, the spill was not reported to local or state authorities and was not discovered until two days later when Dawsonville City workers noticed the creek was discolored.

Georgia’s Environmental Protection Division (EPD) has been on the scene collecting information and monitoring the situation. It has not yet published an official report on the incident, but CRBI’s investigation of the creek on March 24 leads us to believe that the spill of the highly acidic chemical essentially sterilized more than a mile of the creek, killing all aquatic life. Death tolls for fish and salamanders likely number in the hundreds, perhaps more than a thousand on the tiny headwaters stream. Thousands of aquatic insects also likely perished. CRBI tests of the acidity in the creek on March 24 revealed pH levels of 4.5; 6-8 is considered normal. Test conducted two days earlier by Dawsonville showed pH levels of 1. CLICK HERE TO READ DAWSON COUNTY NEWS REPORT ON THE SPILL 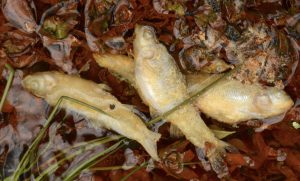 A trio of fish lie dead in Flat Creek

CRBI has reviewed the Gold Creek Foods stormwater monitoring reports for 2017, and is seeking to obtain a copy of the facility’s Stormwater Pollution Prevention Plan (SWPPP). Our initial investigation suggests that EPD had not adequately reviewed the SWPPP or inspected the site recently.

EPD does not have a copy of the SWPPP on file and has not inspected the site in the past five years, according to CRBI correspondence with EPD.

Gold Creek Foods is required to monitor stormwater washing off its facility and report the findings of those tests to EPD four times annually. The company’s 2017 reports show that it exceeded benchmarks for total suspended solids on five of 12 monitoring events, and had extremely high levels of fecal coliform leaving its facility during one monitoring event in June. 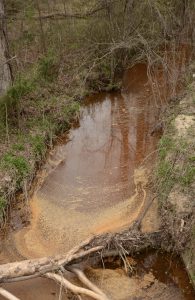 Despite these findings which would normally trigger an evaluation and corrective actions, Gold Creek Foods told EPD that it their controls were working and that in 2018 they planned to conduct just one stormwater monitoring event instead of four.

The company is also required to have in place safeguards that would prevent a spill from reaching nearby streams. It appears that if these safeguards were in place they failed and that internal emergency response was not adequate to stem the flow of the chemical.

Sadly, many do not have adequate plans and EPD does not have the resources or manpower to adequately review plans and inspect facilities. Essentially, the program is a self-regulating with limited oversight from EPD. CLICK HERE TO READ A GEORGIA WATER COALITION REPORT ON THE FAILURE OF THE STATE’S INDUSTRIAL STORMWATER PERMIT PROGRAM.

CRBI will evaluate Gold Creek Foods pollution prevention plan and provide input to EPD and the company on ways to improve controls and prevent further tragedies like this one. CRBI also expects EPD to take enforcement action and will lobby for funds to be used to restore Flat Creek and other tributaries of the Etowah River.

Flat Creek feeds Shoal Creek, an Etowah River tributary that is know to harbor federally endangered Etowah and amber darters. These fish are found no where else in the world. The Etowah also serves as the drinking water source for Cherokee County, Canton, Cartersville and Rome.

Dawson County, Gold Creek Foods
Proud To Be A