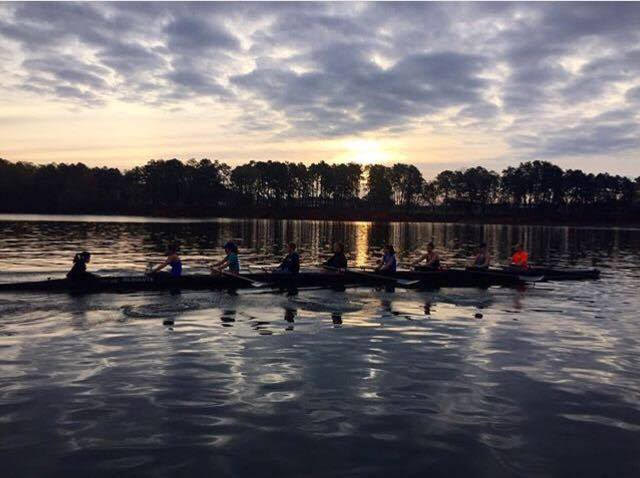 I love the water.  Oceans, rivers, seas, lakes, ponds, puddles.  I’ll jump into them all.  By my personal history (i.e. almost drowning in a pond and getting seasick a… lot), this shouldn’t be the case.  But the unmistakable beauty of our earth’s water systems… there is nothing else like it. It is pure, majestic, and absolutely breathtaking.  And the best of them all?  Rivers.

In September of 2015 I joined DePaul University’s Club Rowing Team, and I found my place on the water.  During my first year, every autumn and spring morning, Monday to Friday, I’d roll out of bed at 5:00 AM (or sometimes earlier), grab a granola bar, and start my mile run to our boathouse.  Five years later, I still cannot believe I ran a mile before the sunrise every morning just to get to a 2-hour rowing practice.  But that’s the power of rivers!  Both a peaceful, silent unbroken surface and the electricity of a rushing current – that is what can motivate a college freshman to go to bed at 9:00PM and wake up before sun.

Before I rowed, one of the best feelings I’d ever experienced was running under the lights in the last event of a track meet.  The adrenaline rush from just one lap around the track was enough to push me to train year round, but it was nothing compared to the feeling of pushing off the dock and sending ripples through the glassy river surface.  Breaking the water with your oar before the city has awakened, with the morning crisp biting at your fingers and nose, and taking control of the power created by moving a boat carrying nine people… that is a feeling I wish I could bottle up and save for later.

And from what I’ve seen, scientists either need to figure out how to turn feelings into perfumes or humans need to change their behavior.  The safety of our rivers is jeopardized and threatened every second of every day.  After spending roughly 300 mornings on the Chicago River, I can easily say pollution is one of the ugliest, most destructive decisions humans ever make.  And it’s continuing.  Without a second thought.

Every spring, as it warmed up and the river and its banks thawed, the smell of sewage and garbage would present greater breathing problems during practice than my asthma.  Multiple times during a practice we’d stop to disentangle our oars from a mess of plastic.  Each splash of water in my eye from a teammate’s oar left me wondering if the contaminated water was going to cause an eye infection.  And who knew that sticking my hand beneath the surface would make it disappear?

This isn’t just happening in Chicago.  My team and I travelled to Pennsylvania, Michigan, Ohio, Georgia, Wisconsin, Tennessee, and Indiana – some bodies of water were breathtaking.  Some were heartbreaking.  What was worse was conversing with opposing teams from across the country and hearing countless stories about how disgustingly polluted their river systems were.

This isn’t magic.  This isn’t beauty.  This isn’t natural.  This isn’t acceptable.  We have to change.  Can you imagine living in that?  Bathing in that?  Raising your children in that?  The aquatic members of your community are living this horror every day.  They deserve better, we have to do better, and most importantly, we can do better!

Riverkeeping is integral to the health of our communities.  Once humanity has healed from recent events, if you have an empty Saturday look into volunteering opportunities to clean up your local waterway.  Have a couple of extra dollars in this month’s budget?  Send it to those who dedicate their work and core values to restoring the natural grace and power of our river systems.  And watch what your contributions are doing directly.  Get out on the water.  Save up your coins and put it to a kayak rental.

Experience the magic and witness the criminal fallout of pollution for yourself.  See how far we’ve come in restoration and how far we’ve yet to go.