What is Coosa River Basin Initiative?

CRBI is a 501c3 grassroots environmental organization based in Rome, Georgia with the mission to protect, preserve, and restore one of North America’s most biologically diverse river systems – the upper Coosa River basin. Since 1993, our staff, board and members have served as advocates for the wise stewardship of the natural resources of the Upper Coosa River basin, or watershed, which stretches from southeastern Tennessee and north central Georgia to Weiss Dam in Northeast Alabama. This includes the Coosa River, the Etowah and Oostanaula rivers and the tributaries of these waterways as well as the land drained by these streams and the air that surrounds this land area.

A member of the international Waterkeeper Alliance, CRBI is also known as the Upper Coosa Riverkeeper. As such, we work to enforce the Clean Water Act, by monitoring pollution and polluters. When pollution problems are identified we use all means necessary, including legal action, to correct these problems.

As a member of the Georgia Water Coalition and Alabama Rivers Alliance, we work to influence water resource policy in both Georgia and Alabama so that clean and plentiful water is available today and for future generations. We work in four program areas: advocacy, education, water monitoring and restoration. Our staff and board of directors lead and direct the efforts of CRBI’s more than 4000 members.

Here’s a quick video reflecting on our recent 25th Anniversary:

After a 1991 meeting in Keith, Georgia with a diverse consortium of citizens fighting local battles over everything from landfills to chipmills, Rome businessman, Jerry Brown, developed the vision of a regional organization that would fight environmental abuses in the entire Coosa River Basin, and CRBI was soon born.

Today, CRBI occupies a Broad Street office in downtown Rome’s business district. The organization employs a professional staff who coordinate volunteers and work with a board of directors to design and implement advocacy, education, water monitoring, restoration and organizational development programs.

Since its founding in 1993, CRBI’s advocacy, education, restoration and water monitoring programs have helped improve water quality in the Coosa River Basin and have helped citizens better understand water resource issues. The organization’s major accomplishments include: 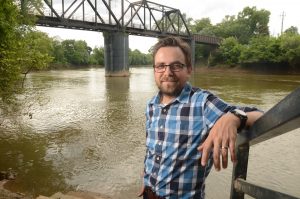 Jesse joined CRBI in December 2016 as Executive Director and Riverkeeper. He previously served two and a half years at Ogeechee Riverkeeper based in Savannah where he worked as the organization’s outreach coordinator. Prior to moving to Savannah,  Jesse worked for a refugee resettlement agency in Stone Mountain, served as a director at the Boys and Girls Clubs of Northwest Georgia for four years, and also served for a short time on the CRBI Board of Directors. He is a 2008 graduate of Berry College where he studied Biology and English. He lives in Rome with his wife Ashley, daughter Lilliana, and son Felix. In free time (whatever that is), he loves to mountain bike. 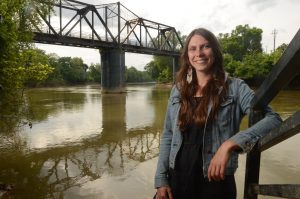 Courtney Paige Altice is the Administrative Assistant with CRBI.  She was born and raised in the Appalachian mountains and spent her formative years in West Virginia where she earned a BA in International Studies from WVU in 2012.  Her time in Appalachia left her with deep reverence for the natural world and a deep passion for finding the ways humanity can live in harmony with the ecosystem.  After graduating from university she continued to pursue her passion for the environment through activism and herbalism.  She earned her PBA degree in Herbal Studies from MUIH in 2017.  She currently lives in Rome, Georgia with her partner Jeremy and their two children Zyena and River.  She enjoys gardening, reading, and writing poetry in her free time.

Katie Owens, field manager for The Nature Conservancy and resident of Rome, Georgia

A little reflection from Mary Oliver to send you i

The 2022 Legislative Session has begun and there a

We got cold weather gear in stock to keep you warm

A joy filled weekend starts with images like this

We’re flagging trails and staging plants for a b

We will consider this a win! 🙌Swipe right to re

Guess what? We have our very popular rainbow dart

Tourism and recreation are a major part of the eco

Our hope for 2022 and beyond is that our community

It's the circle of life- When a species goes extin

An inspiring story of conservation from the Georgi

How Santa will be getting across the River tonight

Happy Holiday Season from the Coosa River Basin In

On a scale of 1 to BaHumbug - how's your holiday p

Did you know that our Catfish Banjo t shirt and th